I am sharing more of an unSQL related story here today because it has a LOT to do with what myself and a few others like Andy Warren ( blog | twitter ) like to espouse upon and that is the power of networking with people.

In the IT field, networking is often overlooked as one of those important goals as you make your way along your career path. It provides you with a LOT of benefits:

1. Information Network: have a problem…maybe you know someone that you can call or email and get a solution. Otherwise, your stuck in Google hell trying to figure out why in the hell something doesn’t work exactly as BOL describes it.

2. Career Network: lost your job…or looking for a new one. I don’t know about you but spending endless hours scrolling through Monster.com job postings and trying to decipher what exactly they are looking for doesn’t seem like an awesome time to me. Wouldn’t it be way better if you could just say ‘”Hey, I am looking, anyone got anything?”. Ask Jorge Segarra AKA @SQLChicken ( Blog | Twitter ) how that worked out for him.

3. Social Network: Hey who doesn’t like to hang out with other people. Even better, what if those same people understood what the heck you were talking about and their eyes didn’t glaze over every time you respond to the question ‘”So what are you up to at work?”.. … it’s nice to know you are not alone.

So is networking that hard?

Do you have to spend countless hours on Twitter and LinkedIn?

Not necessarily, the story below shows you just how easy your networking exercises can be and how those efforts can suddenly snowball for you.

We’ve been busy putting together SQL Saturday #82 Indianapolis ( site ) for a while now and I have personally been really trying to push community involvement in the user groups. More people attending events and user groups equal more people becoming engaged. Those people whom become engaged are less likely to stop going to a user group or event and make it WAY easier for those groups and events to survive…we have been constantly trying to get people to come to the event since it is Indianapolis’ first one…and therefore, everyone is feeling a little bit of pressure in order to pull of a good event. 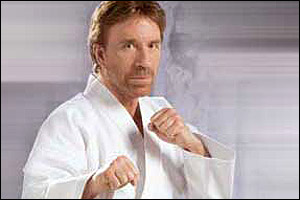 Chuck Norris once punched a man…in his SOUL

Just the other evening, I was in my martial arts class and happen to have been talking with one of their senior members about his kid and how he was really into all things NASA, goes to space camp every year, and computers. I asked if he knew about a Microsoft program called DreamSpark ( website  ) that gets kids software so that they can do all kinds of cool things. No, he hadn’t …so I made a couple of inquires and got him some information on the program to get his son signed up. Then it turns out his wife is learning programming and works for the State of Indiana and a lot of the people in her office IT staff could use some training. Did she know that there was a FREE training event known as  SQL Saturday going on. No. Did she know that there were two free user groups in the area, IndyNDA(Indianapolis .NET Users Group) for .NET developers and IndyPASS (Indianapolis Professional Association for SQL Server) for DBA, that meet for FREE once a month. No. So I went ahead and wrote down the web site information and told her that if she needed any more information for her co-workers then just give me a call.

So what started out as just talking(code for networking) with one parent before class. turned into possibly getting a kid hooked up with Microsoft tech which I am jazzed about…which then led me to network with his mom…which led to me finding out about the dozen or so IT people in here office that didn’t have any knowledge of what cool IT related stuff there is in Indianapolis for them to partake in.

So let’s check the networking scoreboard shall we…

12 IT people for SQL Saturday ,

And hopefully those people will eventually reach out to their network of friends and so on and so forth.

So take a little time next week to stretch those social muscles and see what you may be missing out on.

Enter your email
Subscribe
I recently ran across an SSIS package that needed to be rewritten that included the Checksum Transformation from SQLIS.com [http://www.sqlis.com/sqlis/post/Checksum-Transformation.aspx] . The main reason was that they wanted the removal of the component because they were using it to compare rows instead of
A lot of press has been made of Bitcoin in the last few years, but what exactly is the phenomenon and how could or would it affect the way that we handle transactions? Background For the uninitiated. Bitcoin is a form of cryptocurrency … or more plainly stated, it’s a
So last night upon returning home, I found one of my super machines wanting to be restarted so that it could start to apply a batch of Windows 8 updates to it. This particular machine is one of the Z series motherboards which uses an SSD card as a cache